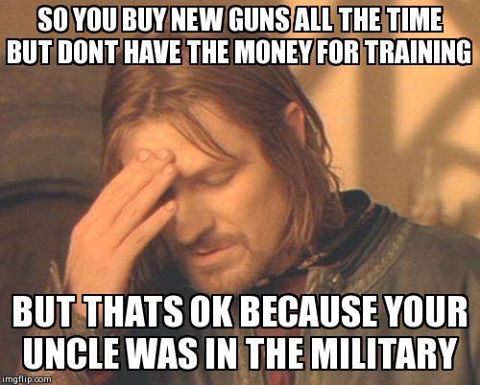 A couple of months ago I found this little meme on Facebook, copied it, and set it aside. I stumbled across it yesterday, and on the spur of the moment I plastered it up on the TAS Facebook page, and then went out to do some Real Life. You know, that thing you do when you go outside, and shoot Real Guns? Yeah. I did that. Twice.

So imagine my surprise when I checked in on the TAS FB page and found that my throwaway post from yesterday is the most widely viewed/shared FB post I’ve ever put up, and it’s still climbing. I guess that’s what you call viral? Dunno. I’m a real-life guy more than cyber-guy.

Pretty funny, right? I thought so too. And I really like the actor, Sean Bean (is that pronounced “SEEN BEEN”, or “SHAWN BAWN”? Ahem. Sorry. Just kidding.) The guy’s a great actor, even though he played the wannabe ex-SAS stolen valor guy in everybody’s favorite merc movie, Ronin.

But I have to admit a couple of things here.

First thing, I have been buying/trading a lot more guns lately than I usually do, and what with one thing and another (mostly that Real Life shit getting in the way of having fun, i.e., having to work to pay bills)  I haven’t been getting to the range much at all for the past 6 months. Ugh. I hate to admit it.  But it’s true. Yesterday and today were the first times I did any kind of workout with my daily carry pistols since last summer, before I went to Africa to shoot Cape Buffalo and such.

But I rectified that. I went back and did one of my basic 250-round pistol routines, which includes strong hand only, weak hand only, simulated barricade shooting, and freestyle (2-hand isosceles) shooting at 4, 7, 10, 15, and 25 yards. I hate shooting at 25 yards, just in case you wondered if you were the only one. But it’s good for you. Sort of like doing your 3X weekly gym routine. Which most of us hardly ever do, but we say it like we really DO do it, to make other people feel guilty. Anyways, I shot some at 25 yards. I did a 250 round workout with my daily carry pistola, and then did a 50-round BUG routine with my S&W J-frame. Finished up with a couple of Bill Drills, then a slow-fire sequence on target heads at 15 yards to finish up with some good marksmanship, as my old mentor Bob Houzenga used to teach us to do.

Second thing, I did some rifle work. Not AR-15 or M4 or other tacticool shit. I did some basic work with  a couple of real rifles, a pair of Savage 99’s: one in 308 Win and the other in 358 Win. Worked some from the bench, then some from a barricade position, and then some from prone. Just FYI, shooting a steel-buttplate 358 Winchester prone is not comfortable. I just bought that rifle, and collector value be damned, I’m putting a Limbsaver recoil pad on that mofo before it kills me.

The cool thing was this. The cool thing was that despite having almost 6 months off pistol shooting, and 3 months off rifle shooting, I got back in my groove in a surprisingly short time frame. And that is something I have to give credit to all the men and women I’ve trained with over the past several decades. Folks who have pushed me, made me a better shooter. Pat Rogers, David Maglio, Bob Houzenga, Dennie Reichard, Mas Ayoob, Steve Denney, Henk Iversen, Dennis Carroll, Tim Lau, Dave Elderton, and many, many more. And I have to give credit to IDPA and IPSC for giving me incentive to shoot better, not just to win matches and trophies, but to be a better combatives shooter. You know, in case some day I would actually have to fight with my gun(s).

And a whole bunch of that has stuck with me. Even through a long hiatus, through the wrecked shoulder I tore up in my motorcycle wreck 2 years ago, through my knee replacements, through all of it. The point is clear: if you shoot enough, if you shoot properly enough, it will stick with you. You won’t have to work as hard to come back to your basic standard if you’ve put in the years of training.

So… am I back to my State-Championship winning form? Not hardly! I’ll have to put in the 10,000+ rounds I ‘ve put in every year I’ve been “competitive” if I want to get there. But what today told me was that, yes, my past training has not left me. I can still do this, with a little discipline and a lot of diligence.

But here’s the kicker, boys and girls:  if you haven’t taken all that training, you can’t do what I did yesterday and today. You can’t get back to a place you’ve never been. The only way to get there is to suck it up, pay the bill, and take the training. And take some more. And then take some more. And then shoot a lot on your own, and then go back and take even more training.

So yeah, I ‘fessed up that I messed up. I bought a bunch of guns, and I didn’t shoot them much. And I didn’t take any training. And now I have to get back to my center and stop buying new guns and shooting the lights out with the guns I’ve got.

Oh, and yeah, I did have an uncle in the military. Seven of them, actually. Three Air Force, 2 in the Navy, and 1 Airborne Infantry.  Two of them gave their lives for King and Country, one in 1941 and one in 1944. All the rest save one have passed on. I cherish and honor their memory and their service. But I don’t lean on their reputations when it comes to my own competence at arms.

Category: Blog
Leave a Reply Cancel reply
Recent Posts
Archives
Categories
We use cookies on our website to give you the most relevant experience by remembering your preferences and repeat visits. By clicking “Accept”, you consent to the use of ALL the cookies.
.
Cookie SettingsAccept
Manage consent